Be The Change:
Celebrating Lilly Rivlin 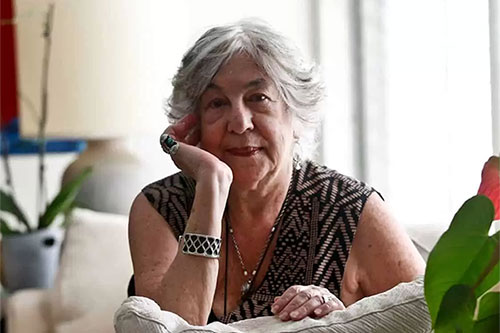 On the eve of International Women’s Day, Partners for Progressive Israel and its Women's Initiative is honoring Lilly Rivlin, whose work gives visibility to women's achievements and their fight for justice.

A renowned filmmaker, Lilly Rivlin uses her talents for Tikkun Olam—to “repair the world.” Her work underscores our historic Jewish obligation to promote and protect human rights, dignity, and the inclusion of all. Her presence on the Board of Partners for Progressive Israel since its inception has been vitally important. Through three decades—and continuing today—Lilly's voice of protest in the face of injustice is still strong and ever-present.

On Sunday, March 7th at 1:00pm EST, we will come together for an online event to celebrate Lilly Rivlin, a pioneer and ongoing source of inspiration for all of us, as the recipient of the Tikkun Olam Award. Prior to that we will have the opportunity to watch several of Lilly’s films.

Proceeds will go to Partners for Progressive Israel's newly-launched Women's Initiative programs, which focus on sharing the voices of women from Palestine, Israel and the global Jewish diaspora. The Initiative opens doors to new perceptions and innovative solutions, deconstructs assumptions, challenges outdated narratives, and seeks to infuse hope into unresolved conditions. Women have rich experiences in all walks of life. The Women’s Initiative shines a light on them.

Even if you can't attend the event, you can still send a message to Lilly which will appear in the program and printed as a gift to her.

Purchase a ticket to the event and watch the following films at leisure between March 1st-March 7th. Links to the films will be emailed to ticket holders by March 1st. 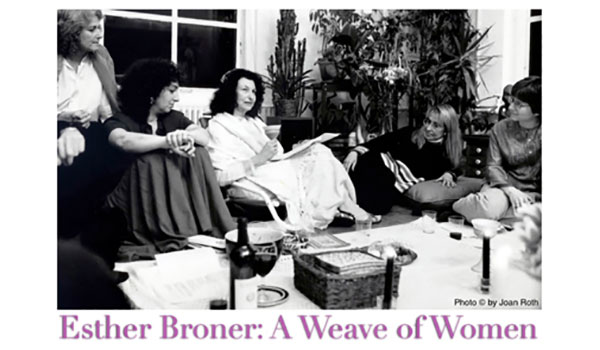 Esther Broner:
A Weave of Women

In 1975, Esther Broner and Naomi Nimrod wrote the first Women's Haggadah, paving the way for modern Jewish feminism. For the next 36 years, Broner led the Feminist Passover Seder in New York City, with a core group of women. This film documents the evolution of Jewish feminism through archival footage and interviews with leading Jewish feminists. It also tells the story of Esther Broner, a writer who explored the double marginalization of being Jewish and female. Film made available courtesy of Women Make Movies. 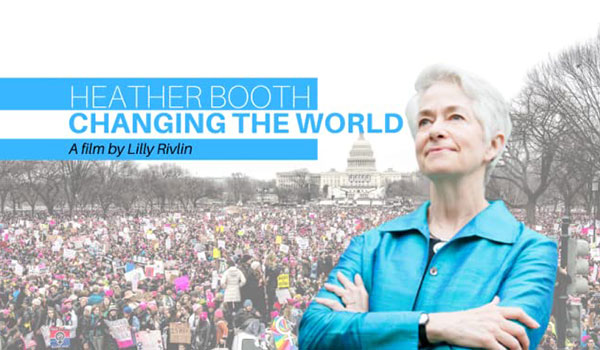 Through Heather Booth’s life and work as a renowned organizer and activist, this film explores many of the pivotal moments in progressive movements that altered our history over the last fifty years, from Booth’s involvement with Fannie Lou Hamer and the Freedom Summer Project, to her founding of the JANE Underground in 1964, to her personal relationships with respected leaders such as Julian Bond and Senator Elizabeth Warren. Film made available courtesy of Women Make Movies. 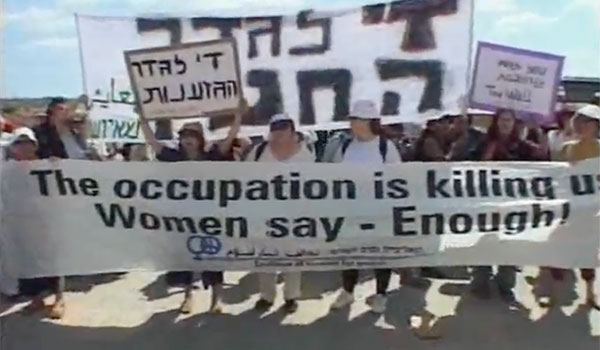 Can You Hear Me?
Israeli and Palestinian Women Fight for Peace

This is the first documentary to explore in depth the role of Israeli and Palestinian women peace activists dealing with one of the world’s oldest conflicts. Though prospects for peace have ebbed and flowed between Israelis and Palestinians, women peace activists have worked consistently to bring an end to the bloodshed that has brought so much anguish to both sides. No matter how desperate the political situation seemed, these women never stopped communicating with each other. 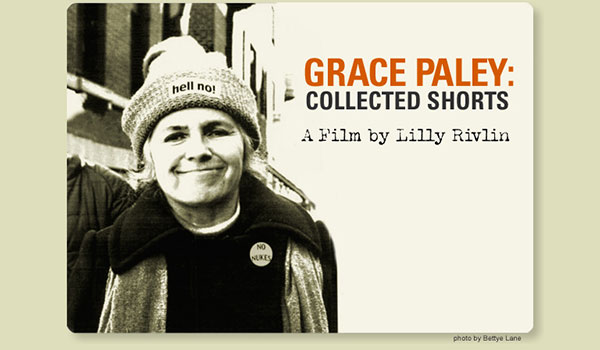 This collection of shorts brings to life the momentous times in which author and activist Grace Paley lived and worked. Reading from her short stories, poems and essays, Paley opposed war and nuclear proliferation, and fought for the rights of women, which often landed her in jail. Grace Paley is a New York icon whose life attests to the possibility that one person can combine public responsibility with individual creativity.

Be The Change: Celebrating Lilly Rivlin

On the eve of International Women’s Day, Partners for Progressive Israel honors Lilly Rivlin, whose work gives visibility to women's achievements and their fight for justice. A renowned filmmaker, Lilly Rivlin uses her talents for Tikkun Olam—to “repair the world.” Her work underscores our historic Jewish obligation to promote and protect human rights, dignity, and the inclusion of all.

Lilly brings to her audiences an awareness of political turmoil, conflicts, hatred and divisions, with a focus on women who fight for justice, peace and inclusion. Her films refuse the silencing of suffering, featuring marginalized voices including women and promoters of peace—Israeli, Palestinian and American. While exploring the limits of women’s efforts in a political arena that denies them a seat at the negotiating table, Lilly’s work ultimately reveals women’s ongoing commitment to peace.

Her presence on the board of Partners for Progressive Israel since its inception has been vitally important. Whenever issues regarding human rights arose, it was Lilly's words that so often stood out. Lilly's tenure as Partners' Board President was a time of innovative, out-of-box ideas. Through three decades—and continuing today—Lilly's voice of protest in the face of injustice is still strong and ever-present.

On the eve of International Women’s Day, and in its spirit of honoring women’s achievements, we come together to celebrate an acclaimed filmmaker whose excellence in filmmaking is matched by her inspiring advocacy for Tikkun Olam. Partners for Progressive Israel honors Lilly Rivlin, a pioneer and ongoing source of inspiration for all of us as the first recipient of the Lilly Rivlin Tikkun Olam Award. 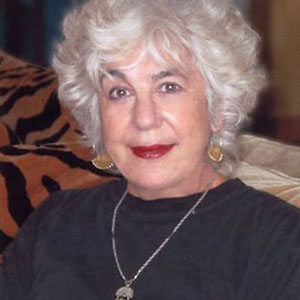 Award winning filmmaker, writer and political activist, Lilly Rivlin lives in New York City. Rivlin was born in Jerusalem and immigrated to the United States with her family in 1945. She did her graduate degree in Political Science at U of C, Berkeley. Before focusing on documentaries, she was a journalist, and foundation consultant on the Middle East and women.

Rivlin was selected as the 2013-14 recipient of the annual Miller Distinguished Jewish Woman Filmmaker Award. In August,2014, Rivlin had a Mini-Retrospective at the Bay area, JCC. The ‘personal is political’ is expressed in the documentaries she produced, directed and wrote.

Her most recent film, Heather Booth: Changing the World was conceived as part of a trilogy about feminist activists in the late 20th century and the beginning of the twenty-first century. The subjects of her first two films, Grace Paley and Esther Broner were both artists, both writers as well as activists. Heather Booth is an organizer, whose art is organizing. Her refrain, which will be heard, at several points of the film is: If you organize you can change the world.

Ms. Rivlin’s articles were published in Newsweek, MS Magazine, The Washington Post, Lear’s and US Magazine. Other publications include Welcome to Israel, with Gila Gevirtz, (2000); Which Lilith? – Feminist Writers Recreate the World’s First Woman, co-edited with Enid Dame and Henny Wenkart (1998); concept and photographs for When Will the Fighting Stop? A Child’s View of Jerusalem (1990).

She began her prominence as an expert on Jewish history with her work as the principal researcher for the best selling account of the 1947 siege of O Jerusalem, by Larry Collins and Dominque Lapierre, (1972).

Partners for Progressive Israel is a progressive American Zionist organization dedicated to the achievement of a durable and just peace between the State of Israel and its neighbors, which includes an end to Israel’s occupation based on a two-state solution. We support Israelis working to ensure social justice, civil rights, and equality for all of Israel’s inhabitants. Partners promotes a just Israeli society by cultivating Jewish-Arab partnerships and seeks to deepen American Jews’ understanding of the complexities of both Israeli and Palestinian societies.

The Women’s Initiative focuses on sharing the voices of women from Palestine, Israel and the global Jewish diaspora. Vital insights and successes of women in these communities are often suppressed or lost in conversations and political decisions. The Women’s Initiative provides a platform for them to be heard and supported. We value the perspectives of women from all social and political spheres: activists, academics, culture builders, politicians, and grassroots workers.

By centering these voices the Women’s Initiative opens the door to new perceptions and innovative solutions. It strives to deconstruct assumptions, challenge outdated narratives, and seeks to infuse hope into unresolved, on-the-ground conditions.

Women have rich experiences and achievements in all walks of life. We will be shining a light on them.